Artist Tod Hanson created an artwork for the entrance-way and staircase of the recently refurbished Storey Institute, now known as The Storey. He produced brightly coloured decorative paintings on the walls and ceilings, which enhance the historic architectural features, and bring it up to date. The painting catches people’s eye when they are passing, drawing them in, and creating a sense of ‘arrival’. 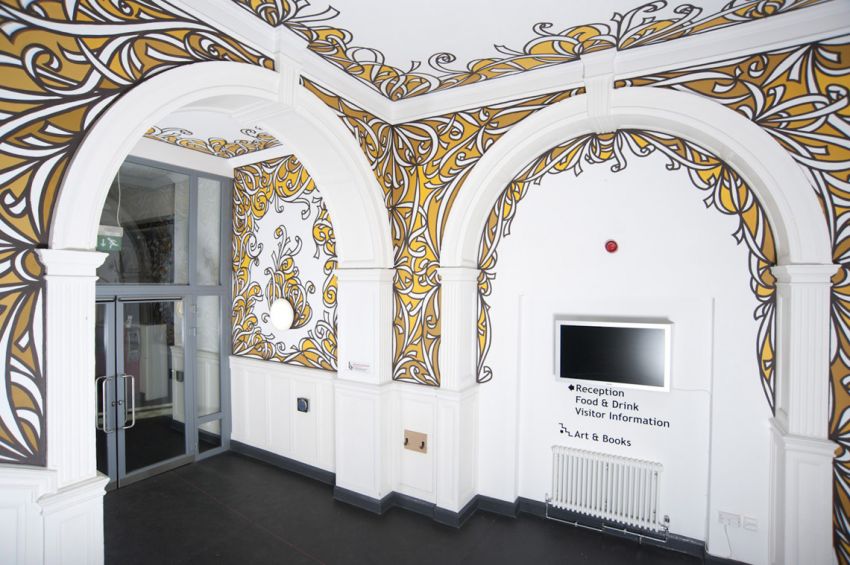 The Storey Institute has been has been providing the people of Lancaster with creative inspiration for over a hundred years. This Victorian monument to art and learning is a cultural base for ideas, innovation, and creativity. Tod’s use of bold graphics and site sensitive interventions make his work ideal for the building.

This project was initiated with part of the funds received by Lancaster City Council from Arts Council England for the refurbishment of the Storey Institute building, to create The Storey Creative Industries Centre. Funds were awarded under the Building Sights Initiative, to engage the public with the development of the building. Part of these funds were allocated to commission a public artwork. Its aim was to attract people to, and draw attention to, the new use of the building as an energetic, contemporary and creative centre. 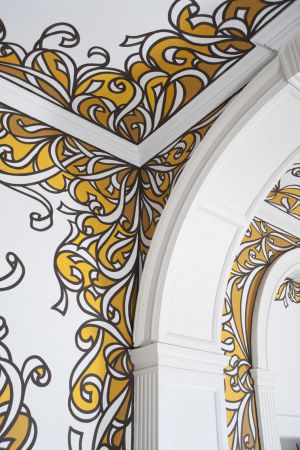 The original intention was to commission an artwork for the exterior of the building. Tod Hanson, was selected to carry out this commission, but unfortunately, insufficient funds were obtained for its realisation. So the Steering Group commissioned him to produce an artwork with the funds available for the entrance-way of the building.

From this point onwards Storey Gallery took over the management and delivery of the project. Tod Hanson created the artwork between September and November 2010. He delivered a public talk about his work at the end of that month for the Storey Gallery Talks on Art series.

The aim of The Storey is to be a vibrant centre that stimulates creative thought and production, for the benefit of the local economy. The artwork reflects these ambitions, and it exemplifies the boldness and confidence in attitude and thought which will be required to make The Storey successful. 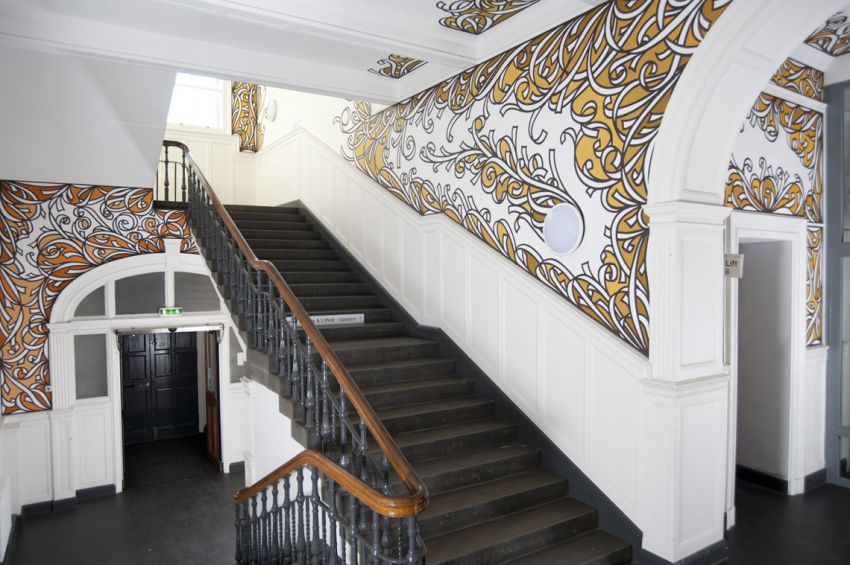 Tod Hanson lives and works in London, exhibiting nationally and internationally, working across the fields of public art, street art, and gallery installation.

Tod’s optically high-energy style taps into the razzamazz of a globalizing culture. In the 1990s he produced large-scale graphics for Greenpeace campaigns, and decorated night-club interiors. These experiences are now combined with his interest in the history of mapping, architecture, and the decorative arts. He recently created a tile mural for a new station at Haggerston in east London.

Tod Hanson gave a talk about his work, and the creation of this piece, as one of ourTalks on Art.

A film of this talk can be seen here